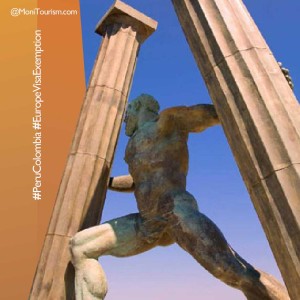 Recent reports from official European Union (EU) sources indicate that visa requirements for Peruvian and Colombian citizens could be lifted within the first six months of 2014.

The Colombian Ambassador in Spain, Fernando Carrillo, said to El Comercio: “What’s left is to do a technical evaluation. The elimination of visas for Colombian [and Peruvian] citizens could be finalized this trimester.”

That means Peruvian and Colombian citizens would no longer require visas for stays of 90 days or less in Schengen Area countries, promising a consequent impact on the European tourism industry. Why?

Peru is a 30-million-person country with a quite low income per capita (Nominal GDP per capita = $7,000.00). 20% of the national wealth is concentrated in 5% of the population. That makes more than 1.5 million potential world travelers.

Colombia is bigger than its Andean neighbor, counting nearly 50 million people. The country is infamous for its wealth inequality, ranking seventh in the world 1.  It comes as no surprise, then, that Colombia sports one of the fastest growing affluent populations in the world. 2

Currently, around 200,000 Peruvian citizens travel to Schengen Area countries every year. Although we don’t have numbers for Colombians, one can reasonably expect them to be even higher than the Peruvians’.

Carolina Carranza of the Peruvian University of Applied Sciences told Gestion that the average Peruvian tourist in Europe would stay for 10 to 15 days in the Schengen Area and spend between US$3,000 and US$4,000 during their trip.

Many policymakers and industry operators are commenting on the effect that such an aperture might have on the European tourism market. As Carranza predicts, the number of Peruvians alone visiting Schengen Area countries could rise to 500,000 next year. Combine that with the number of potential Colombian travelers, and it is reasonable to expect a total financial injection of somewhere between US$2 billion and US$4 billion into the European tourism economy.

However, nothing has been said about the reciprocity effect of the EU’s decision. In fact, in order for the visa exemption to be reciprocated under visa-waiver agreements, the text provides for the enabling of all EU citizens who wish to travel to these countries to do so without visas.

So, what we actually see underlying this coming agreement is an even greater effect on the Peruvian and Colombian tourism market. A trend yet to be analyzed.

Back to the effect on the European market, there is still something to clarify, the big question being: Who is going to get their hands on this Incan pot of gold? And, how? Well, language affinity, together with a solid network of air links, seems to give a certain advantage to Spain. At least, as the preferred continental gateway. This is probably why the Iberian state has been the main promoter of the visa requirement lifting since the beginning.

As we know, these changes produce effects with a bit of delay, such that we expect 2015 to be the first year to show a trend as well as answer the question: Will the Latino-Americans bring their ‘gold’ to Europe’s financial system or will the Europeans make ‘El Dorado’ more alluring than it used to be four centuries ago?

Will China’s First Tourism Law Make The Rest Of The World A Forbidden City For Chinese Tourists?

Is London the World’s New, Most-Visited or Proudest City?